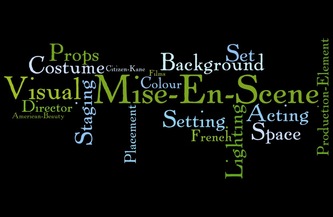 Mise-en-Scene  is a French term meaning ‘placed on stage’ .It is the expression used to describe the design aspects of a theatre or film production, which essentially means “visual theme” visual story telling. It includes anything inside the frame, objects that describe the scene, ranging from props, locations, actors, costume, makeup, camera angle, lighting etc. It may hold artificial and natural things. Each of these, play an important role in the story being told and how it is presented.

A ‘Video’ is used and gives a sense of documenting something, whilst a ‘Film’ holds a deeper meaning.

This is a text widget. The Text Widget allows you to add text or HTML to your sidebar. You can use a text widget to display text, links, images, HTML, or a combination of these. Edit them in the Widget section of the Customizer.
Loading Comments...
%d bloggers like this: